To celebrate "NON-FICTION NOVEMBER" Mrs. Crabbe's book of the month is, "The man who walked between the towers" by Mordicai Gerstein. 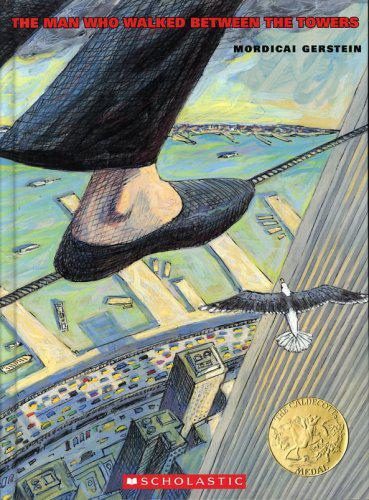 The story of a daring tightrope walk between skyscrapers, as seen in Robert Zemeckis' The Walk, starring Joseph Gordon-Levitt.

In 1974, French aerialist Philippe Petit threw a tightrope between the two towers of the World Trade Center and spent an hour walking, dancing, and performing high-wire tricks a quarter mile in the sky. This picture book captures the poetry and magic of the event with a poetry of its own: lyrical words and lovely paintings that present the detail, daring, and--in two dramatic foldout spreads-- the vertiginous drama of Petit's feat.